Can a social movement endure at UNE?

Social movements start with connections that are made through strong ties. Strong ties are close relationships like family, or close friends. Duhigg talks about the civil rights movement, but specifically Rosa Parks and his definition in relation to this story declares “strong ties – firsthand relationships — with dozens of groups throughout Montgomery that didn’t usually come into contact with one another”(Duhigg 89). When Rosa Parks was arrested her strong ties to lawyers and others in the community got her out of jail and helped spread the word of the injustice that was occurring. Her amount of strong ties also made this story larger than others had been. Strong ties are the people that will support the movement without hesitation and they will spread the word about the movement you wish to start. While strong ties can help gain the momentum to get movements started, many other relationships and actions are needed for a movement to endure. Movements also need weak ties to continue to endure after all strong ties have been exhausted.

Weak ties open doors to social groups that are not accessed through strong ties. Weak ties can get information to someone that would have not been received through strong ties because strong ties usually have the same social groups. From Duhigg’s writing we can gather that weak ties are the relationships with acquaintances that find opportunities that we usually would not have access to. These weak ties help social movements because they have connections to other people that strong ties do not have. These weak ties also rely on social pressure to not be ostracized by their peers. A social movement would endure at UNE because people would feel pressured by their weak ties to participate if the movements starts with a large organization. A social movement is possible at UNE if it starts with a large enough organization like the football team. Since the football team is the newest team with the most support it would be able to garner enough support for the movement to spread throughout the university. All the players strong ties with each other could start the movement and the weak ties would continue it. While this club is large enough and has enough ties throughout the student body, the movement will still need strong ties with faculty members so that the movement can spread school wide. Erica Rousseau would be a good place to start since she works on civil engagement and inclusivity on campus so she would know what ties with certain people are most important. She would also know how to make sure it continues once everyone is aware of it. Weak ties using peer pressure in a way is one way to make sure it continues because no one wants their friends to think they are not involved in the issues that everyone is participating in changing. Once the movement has spread the changes made through that movement will become social habits. According to Duhigg, social habits are “the behaviors that occur unthinkingly, across dozens or hundreds or thousands of people which are often hard to see as they emerge, but which contain a power that can change the world”(Duhigg 87). By making this social movement people will slowly change their behaviors and before we know it they will have become one of many social habits that are exhibited everyday.

It is very possible to start an anti-racist movement at UNE but it would take quite a bit of effort.

A social movement at UNE is possible to start but the implications would be hard to overcome. Strong ties are key into starting this movement but for it to endure it would need weak ties throughout the university. The strong ties would need to be between the African-Americans which would take time to build and there would also need to be strong ties with the faculty members that care about starting this movement throughout the faculty and student body. Next there will need to be enough weak ties to spread through the school and raise enough concern through all social groups to start a movement serious enough that they can’t ignore.

My mom stopped smoking after she found out she was pregnant. After giving birth she tried to start smoking again but just the smell repulsed her to this day. I think a drastic change has to happen in someone’s life for them to willingly decide to stop a bad habit or cycle in their life.

The Blackness Project was in response to the Whiteness Project film that was released. This film shows the views of African-Americans and what they feel it’s like to be black in America. Black people have been facing bias and this film along with the New York Times article about professionals who experience bias at work bring light to the situation. In the article there are accounts of professionals whose professions were incorrectly identified or not believed. They also explain the behaviors and actions they take to counteract these conceptions. For example Dr. Gomez was seen as not qualified enough so she started wearing her badge on her chest as opposed to on her hip like her colleagues. 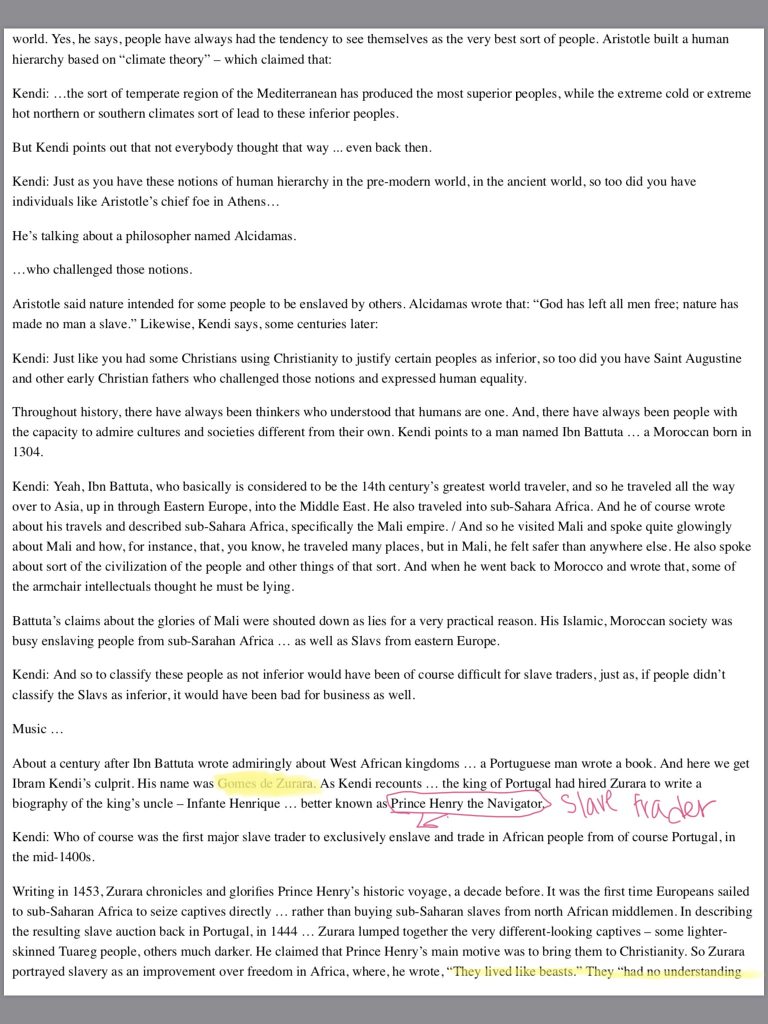 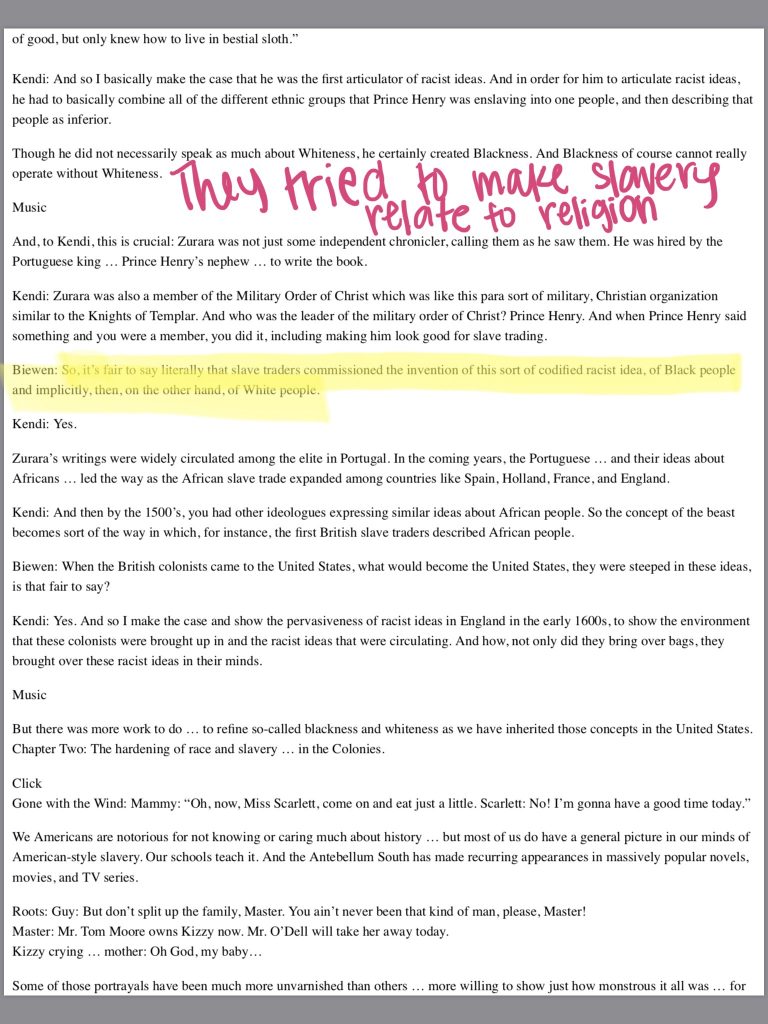 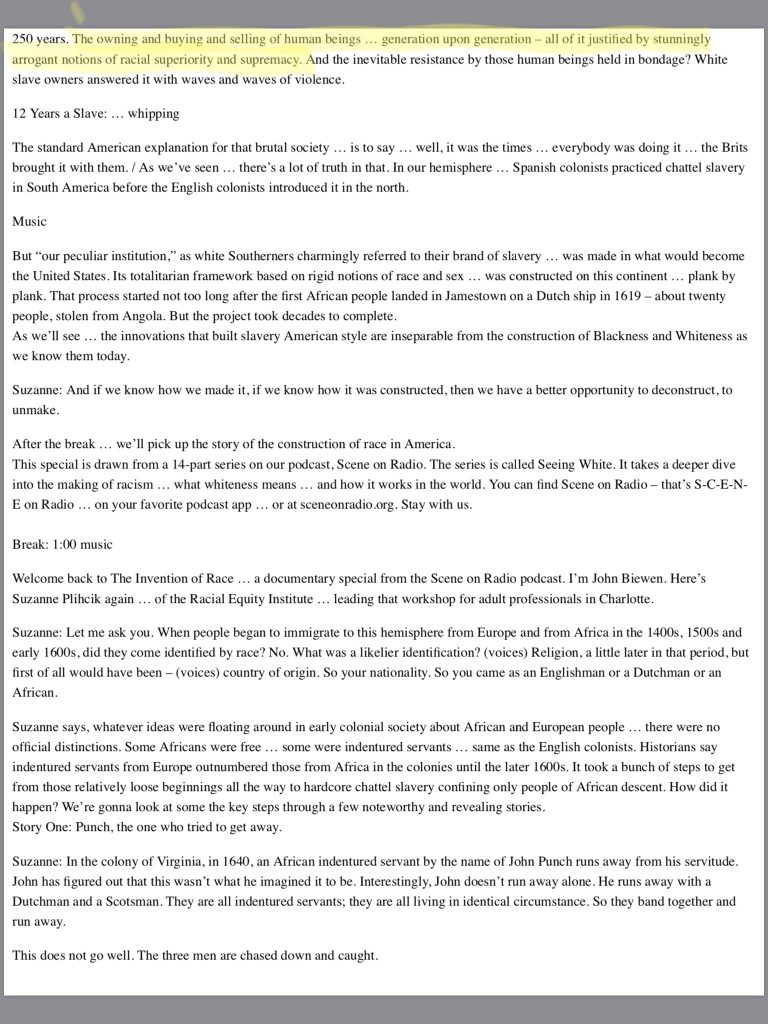 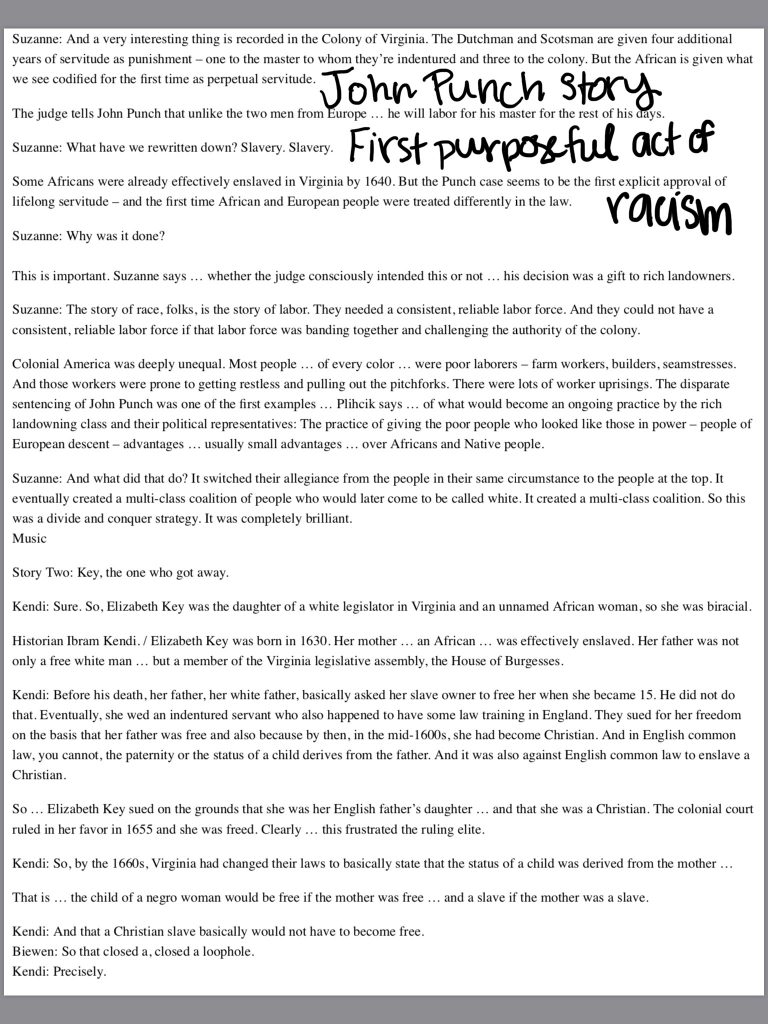 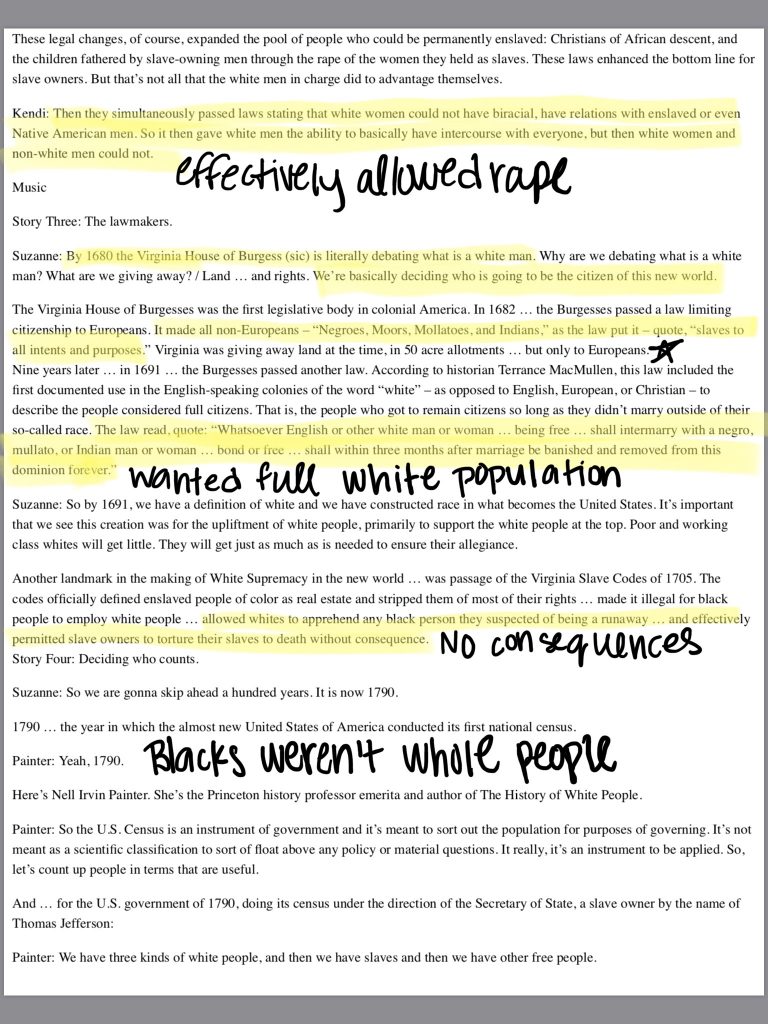 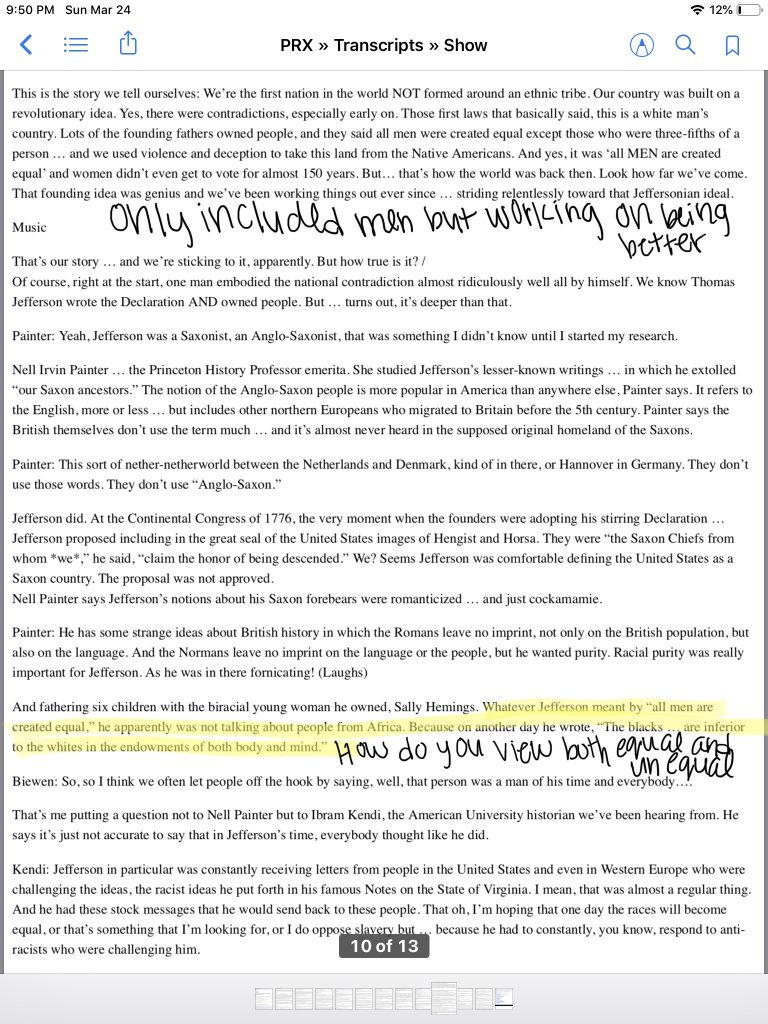 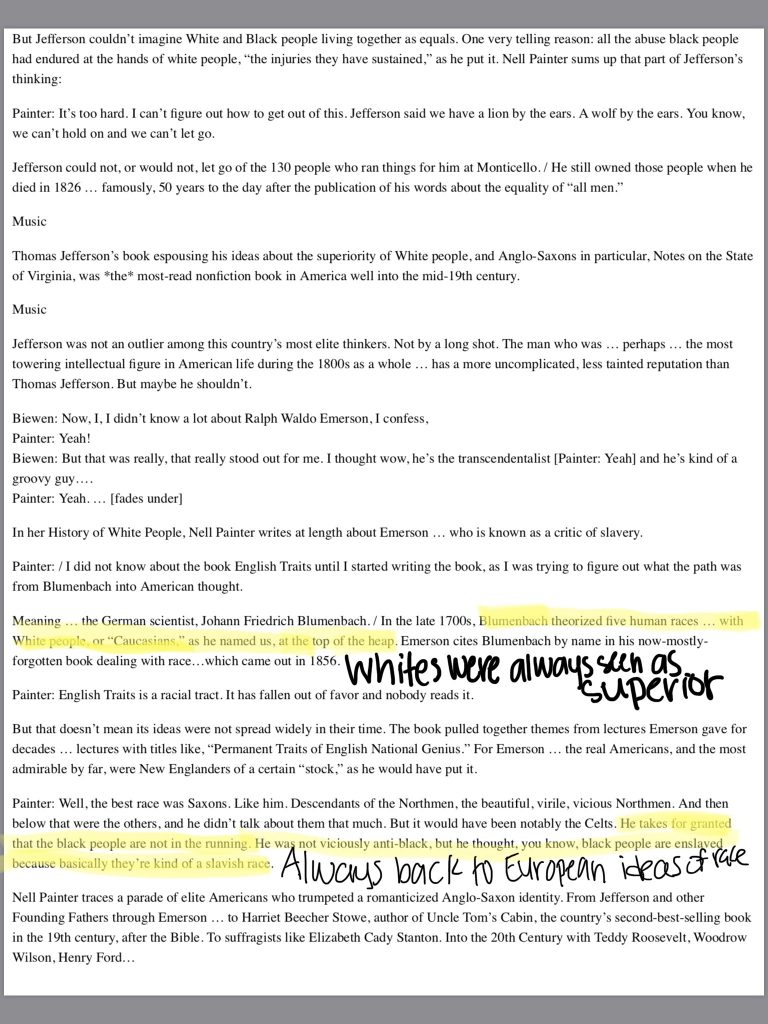 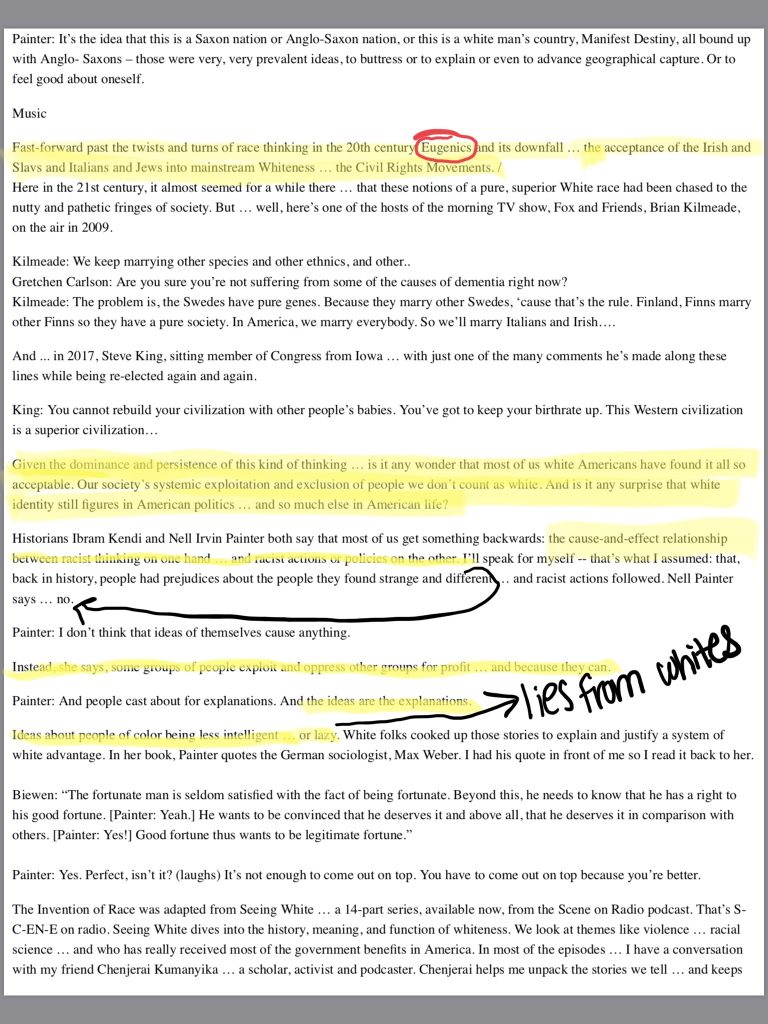 From listening to “The Invention of Race” I learned that scientifically everyone is believed to be from African descent but we all look different based on where people moved to when they left Africa. This was interesting because when people started exploring the world they weren’t looking at race because it wasn’t a thing yet, but they did look at how everyone looked different. They also discussed how “there is more genetic variation within groups that have come to be called races than there is across groups that have come to be called races”(1). Race was not something that was thought about until religion became a large practiced idea in England. While people were always owned and bought and sold no one was thought of as lesser until this point. The radio show also discussed well known figures like Thomas Jefferson and Ralph Waldo Emerson and how they were involved in the making of race.

It is difficult to know who is a native Hawaiian because there is so much mixing so there is no distinction between the different races. These people are not distinct because they do not fit into a certain group.

Race is real because people face discrimination everyday. Even though race is not in our genes it does shape how you’re viewed in the world because of how you look. Race can impact job opportunities even if a person doesn’t want to associate with their race or tries to escape the stereotypes. Race is real because it is what makes our appearances unique by how races are mixed together. A lot of the differences of race are cultural but they only formed to differentiate themselves and had to make cultures because they are looked down upon.

My participation and classwork is not where it should be seeing as I did not write paper 3. I need to seriously improve my writing process by participating in class so that I can pass this course. I also need to complete all the homework up until the end of the course so that I can earn all the possible points to pass the class. My papers will greatly improve because I will be keeping up with all the material so I will have better quotes and a better understanding of what I’m writing about. So I need to greatly improve in all the learning outcomes to pass this class.

The section of the reading on page 19-22 discusses Rose’s interest in his chemistry set. This interest shows a child’s curiosity with the world and how things that are more and more dangerous interest him. This is shown when his mom’s coworker has a son that was seriously injured while playing with explosives. While most would see that as scary he wanted to experience it. He follows that incident by wanting to recreate that event on himself. He is exploring his interests and he seems to be taking a liking to the sciences like chemistry or astronomy.